You Are What You Create

What makes art sticky? When in conversation with Mumbai-based scriptwriter Sumi Mathai, it becomes apparent that all she thinks and feels is expressed and contained within her work. The ebbs of growing up, the cities she loves and her stencils for the future all hold a place of prominence, and show themselves in the precision of her words.

Background, talent and a bit of luck came together this year, when her debut short film Detour won her a Special Jury Mention award at the Jio MAMI 19th Mumbai Film Festival. We spoke to her about what goes into what she does:

Growing up, what stories inspired your creative passion?

I grew up in a small village in Kerala, and I spent most of my childhood reading children’s comic books and climbing trees. By the time I was in high school, I started reading Malayalam weekly magazines my mother used to subscribe to. These magazines had stories which were mostly about women who were sad, and I really took to them. Something about these women, who were pining for a better partner, better circumstances, and a better life, appealed to the volatile teenager that I was. I would wait eagerly for every Thursday for the magazine to arrive and there would be a tug of war between me and my mother as to who will get to read these stories first. Obviously, she would win because I had to go to school, but she would promise that by the time I return from school, she would be done and I could have them all to myself.

It was at the same time, luckily, I discovered the great reservoir that is Malayalam literature. Stumbling upon authors like Basheer, Kamala Das, M.T. Vasudevan Nair and O.V. Vijayan was transcendental for me at that point in my life. I hurled myself into the magnetic and mesmerizing literary world created by these geniuses. Basheer’s riotous sense of humor, Das’ poignant tales on her early marriage, her self-discovery, and her fearless exploration of female sexuality, all these had a tremendous impact on me as an impressionable teenager, growing up in Kerala.

Luckily, I discovered the great reservoir that is Malayalam literature. Stumbling upon authors like Basheer, Kamala Das, M.T. Vasudevan Nair and O.V. Vijayan was transcendental for me at that point in my life. I hurled myself into the magnetic and mesmerizing literary world created by these geniuses.

Can you explain your character development process?

I am not sure if I have a lot to say on this because I have only ever made one film, and it was partially based on an experience that had happened to me in real life. So, largely speaking, the protagonist was saying things I would have said or belonged to a universe I myself was familiar with. But, if I try to answer this question hypothetically, I think any character I might conjure up will definitely have some resonance with what I as a person am capable of thinking and feeling and wondering.

What are your thoughts on structure?

I feel that we don’t have to adhere to any rules when it comes to creating art. A structure I would want for a film will depend on the story and the way I want to say it. I believe the structure will show itself once you have a story to tell.

While you’re writing, do you have your final shots very clearly in mind or are they sometimes dictated by location?

I usually have the final shots very clear in my mind, and it’s more or less a journey backward in terms of the story. Maybe it’s a merit of the short film format? Because you have that one moment that is arresting around which you have built a story, which you want to deliver at the end with a bang. The script I am writing currently, the idea of it too, came to me as the closing shot, and now I am working to give it a definitive shape. However, I am not rigid with what’s on the paper. Magic can happen anytime, anywhere, and I am open to amending things. 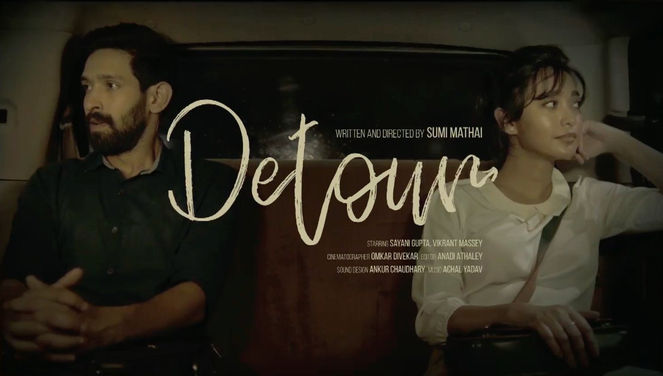 Do you write with specific actors in mind?

I don’t. I am not really sure how that works either. But it’d be just amazing to know that there are people out there who could do justice to the world you have created on paper. Mia Hansen Love, director of Things To Come, said she wrote the script with Isabelle Huppert in mind. I totally get it if filmmakers are writing stories because they have Isabelle Huppert in mind, because she is out of this world and is a bonafide badass.

How emotionally involved are you with the characters you create?

What heartaches have you encountered as a screenwriter?

Confusion. When I was writing Detour, I felt like I wanted to explore a bunch of themes and that’s never advisable for a short film. Always go for a single theme that you want to dig deeper in and offer a perspective on. There is also this unwarranted, crippling, general sense of self-doubt, the What am I even writing? But it comes and goes.

What was the most amazing part of the process?

A lot of things. Most important being: I finally came of age, at 29. Jokes apart, making this film from scratch – from scripting to pre-production to production to post, all in one month, was pretty intense. I mean, I am quite sure my DNA has mutated a bit during all of this, because the person I was before the film and the person I am now, are totally two different people. Which is to say, the process gave me immense self-confidence, a sense of purpose, the courage to pursue my passion, and a faith in the magic of universe – none of which I had before.

What do you love doing asides from writing?

I like a lot of things, I am a chronic like-r of things. I like to watch films, listen to music and dance by myself, I have recently taken a liking to cooking and I feel unstoppable, as in, I am never not thinking of what to cook next. I like to go for long walks and look at old architecture and snap photographs, since I live in an old part of Bombay. I like to strike up conversations with strangers if they don’t seem creepy and find out about their lives and their dreams. I like to know how differently they are conducting this business of living from mine.

I am inspired by so many amazing artists and I especially dig it when someone has a strong grasp on reality and relatability. I like it when there is quirk, irreverence and honesty in the methods employed to tell a story.

Who is your screenwriting role model? What about them have you tried to emulate in your own work?

I would not want to emulate anyone because I hope to develop my own style and voice. But I am inspired by so many amazing artists and I especially dig it when someone has a strong grasp on reality and relatability. I like it when there is quirk, irreverence and honesty in the methods employed to tell a story. A classic example would be Amelie.

I also like intense drama; scenes taut with tension and wonder, like Asghar Farhadi. I find his grasp on writing and creating a world where things are going to come crashing down, formidable. Every time I see a film of his, I am literally on the edge of the seat, biting my fingers and internally screaming “If it’s not that, then what is it? Tell me already goddammit!”. But he takes his own sweet time.

I like Baumbach-Gerwig as a writing duo and the films they make, there are beautiful dialogues in their films that are just so pure, raw and dripping of human vulnerability. I feel the same about Mike Mills’ films, he writes for the underdogs.

How do you overcome writer’s block?

I wait for it to pass, I don’t and can’t excise it.

Tanya Mehta on the cities that defined her personal style

Please enter at least 3 characters 0 Results for your search

May we suggest a tag?

May we suggest an author?